Mental Graffiti is a Chicago poetry slam/open mic featuring poets from around Chicago, the nation, and the world. Each year, poets compete to qualify for the Mental Graffiti Slam Team and go on to compete at the National Poetry Slam.

The Fellowship for Filipino Migrants focuses on women’s issues and violence against women. The Fellowship for Filipino Migrants-FFM recognizes the colonial history of Filipino migration to the US and the present day diaspora of Filipinos to over 200 countries in search of jobs. It asserts that in order to promote and protect their rights and welfare Filipinos should organize abroad and strive to be in solidarity with other immigrants and peoples’ who are standing for their rights. In the Midwest the FFM seeks to organize Filipinos through its Youth Desk, Women’s Desk, Migrants Desk and Kabalikat Community Support. It has a Philippine Advocacy Program as well as a Solidarity Desk. Currently, the FFM is training organizers for its various programs. It facilitated the training of youth organizers and leaders of ANAKBAYAN Filipino Youth. It aims to start and facilitate the organizing of two new Filipino mass organizations in the midwest, GABRIELA and MIGRANTE. The FFM is also the midwest secretariat of the National Alliance for Filipino Concerns-NAFCON. 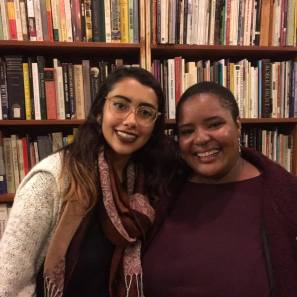 Keisa Reynolds is a queer Black feminist writer, storyteller, and community educator. Originally from Richmond, California, Keisa is a graduate of Columbia College’s Cultural Studies program and has been a part of Chicago’s anti-violence movement since 2012. They co-founded and host Whine Club with Nohemi Rosales.

Nohemi Rosales is a 22 year old queer Mexican immigrant living in Chicago. They are a teacher at elementary schools on Chicago’s West Side and love inspiring youth to be excited about literature. Nohemi is majoring in Creative Writing at Columbia College and co-founded Whine Club with Keisa Reynolds. 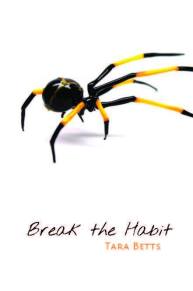 TARA BETTS is the author of Break the Habit (Trio House Press, 2016) and Arc & Hue. Her chapbooks include the upcoming Never Been Lois Lane (dancing girl press, 2016), 7 x 7: kwansabas, and THE GREATEST!: An Homage to Muhammad Ali. Tara holds a MFA from New England College and a Ph.D. from Binghamton University. Her poems, essays, and short stories have appeared in several magazines and anthologies, including Essence, POETRY magazine, NYLON, Cicada, Octavia’s Brood, Bum Rush the Page, The Break Beat Poets, CHORUS: A Literary Mixtape, Home Girls Make Some Noise, and both Spoken Word Revolution anthologies. Tara currently teaches at University of Illinois-Chicago.

Jack is a senior at Loyola University Chicago working towards a BA in Women’s Studies & Gender Studies with minors in Political Science, Social Work, and Theology. Originally from Phoenix, AZ, Jack’s passion for writing started when he was six and published the first and only issue of “Super Gerbil” a hand drawn graphic novel about his pet gerbil, Boris. Today, Jack writes primarily spoken word poetry that focuses on body image, disability, and survivorship. When he’s not writing or performing, he is often found indulging in his other passions of coffee-drinking, Catholic Faith & Justice Ministry, and social justice tirades. Jack hopes to pursue a career in trauma informed creative arts therapy for other survivors of childhood sexual abuse. 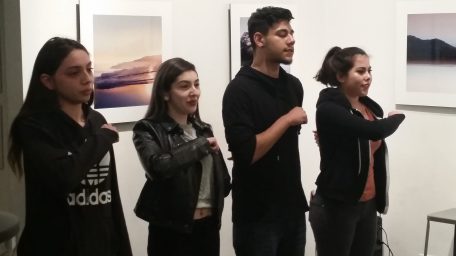 Erika Gisela Abad Merced, PhD is a Queer Latina poet, born and raised in Chicago. She returned a couple years ago to return to working on the amnesty campaign of Puerto Rican political prisoner, Oscar Lopez Rivera. She has also continued her investment in working to create safe spaces for survivors of domestic and sexual violence as a medical advocate for RVA. Her poetry has been published in such journals as Dialogo, Mujeres de Maiz as well as online zines like La Respuesta. She started performing at the Batey Urbano on Division St in 2004, she has since performed in the Pacific Northwest, being a frequent performer at a sex & queer positive open mic called Dirty Queer.

Dr. Merced is also bringing back the Butterfly Poetry Project in April!

Alexandra is a multidisciplinary artist who’s background includes songwriting, theatre, storytelling and poetry. She hails from California but has found her heart here in Chicago. You may have seen her out with the Revolutionary Poets Brigade or dancing around at Salonathon. Currently working on her Masters in Social Work, Alexandra believes in the healing and transformative power of art and hopes to use her degree for music and art therapy as well as work with those who have experienced trauma. Tonight, she will be performing poems from her current collection entitled Rainfall which spans pieces from her life as a poet. 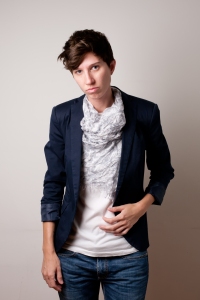 Andy Karol is a poet and performer based out of Chicago. Although Andy has only been in the poetry scene for a couple of years, she is no stranger to connecting with audiences through a rich history of theatre, performance art, and photography. That connection has been recreated, tested, and driven through her own performance poetry shared on numerous stages all around Chicago (and beyond).

This past May, Andy released her debut chapbook, Fail-Safe, that dives hard into the issues of relationships, living authentically, gender and sexuality, parenting, and personal mental struggles. This July, she was a semi-finalist in the Gwendolyn Brooks Open Mic Awards and is most recently a member of the Lethal Poetry collective.   Be sure to stay in touch with Andy at www.andykarol.com and on Facebook.

Email survivingthemic@gmail.com for venue and directions. 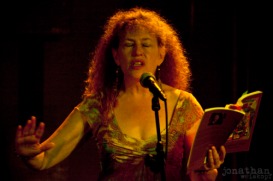 Nina Corwin is the author of two books of poetry, “The Uncertainty of Maps” and “Conversations With Friendly Demons and Tainted Saints.” Her work can be found in Harvard Review, Poetry East, Wisconsin, Hotel Amerika, New Ohio, and Southern Poetry Reviews as well as the print/audio archive at From the Fishouse. She has received awards from the Illinois Arts Council, Illinois State Poetry Society and Wesleyan University as well as being a nominee for the Pushcart Prize. Corwin is curator for the reading series at Chicago’s Woman Made Gallery.

In daylight hours, she is a practicing psychotherapist known for her work in the field of psychological trauma and the treatment of victims of violence. Spokesperson and Past President for VOICES (Victims of Incest Can Emerge Survivors) In Action, Inc., she has provided workshops, seminars and workshops to both professional, academic and survivor audiences across the country.

Mojdeh is a 4x award winning writer, performer, photographer, educator, and conceptual fine artist.
She burst into the performance scene at 14, her theater & music talents captured the attention of an agent at 16, and has shared the stage with folks like Saul Williams, Pere Ubu, John Legend, many HBO Def poets, and several fine arts performance artists since.

Her fine art has been exhibited in Berlin, Tokyo, Chicago, and New York City. Her photography & writing have been published by many media sources & journals including WBEZ, Alarm Press, Chicago Now, and Muzzle Magazine. She has released five albums of music and poetry independently. She is a member of »radiant devices«, and recently published her first book “born into dissonance.”

She’s been an executive producer for festivals like Lethal Poetry’s Nights of Sight & Sound, the world’s largest mobile art show Art On Track, and one of Chicago’s PSi certified slams, Words That Kill. Mojdeh received her BFA from The School of the Art Institute of Chicago and is the founder Lethal Poetry Inc and LUCID Art Lab, an arts organizations that activate artists as social servants.

Born in California, Jessica Fenlon was raised in Wisconsin. While studying violin performance in a conservatory of music, she survived a 6-month death experience induced by medical malpractice. Unable write or play violin, she took up meditation. In 1995 she enrolled in the University of Wisconsin, as a studio art major.
She completed her BFA at University of Wisconsin-Madison 1999; her MFA at the School of the Museum of Fine Arts, Boston, in 2002.
An animation-based video artist, she has collaborated on theatrical performances with choreographers, bands, and literary performers. She staged several performances of her own, combining spoken-word poetry performances with film and sound. These experiments played most notably at Pittsburgh’s Brillobox in the Beautiful Noise series, and the Mattress Factory Museum of Contemporary Art. Her first book of poetry, Spiritual Side Effects, was published in late 2008 by Pittsburgh’s 6 Gallery Press.
In late 2010, she moved to Chicago, IL. She has focused on glitch-based digital image alteration as source material for multi-media artwork, while publishing poems in magazines (WEAVE, Free State Review) and as spoken word performances. Since 2011 her short films have screened in Dublin, Ireland; London, England; Naples and Sicily, Italy; Varna, Bulgaria; Poland, Germany, and Havana, Cuba, as well as Cairo, Egypt.
Her meditation practice includes prayer without ceasing; tonglen; chöd; mandala creation; mantra, chant, and other breathwork; zazen; and awkward yoga.

AJA ZAKIYA HALL is a Chicago native and Second City alumnus. She has taught performance and visual arts, along with creative writing and poetry in Chicago Public Schools and had the honor of serving as a Rites of Passage Favilitator and Writing Coach to HS students in West Africa. She will be sharing poetry, song and monologue, as well as a short story or two. Aja is a healer and uses Interdisciplinary Arts and Energy Therapies as her tools. 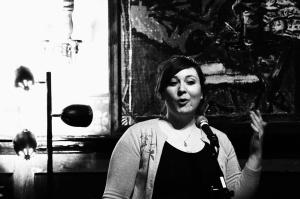 STEPHANIE LANE SUTTON is a poet, performer, and educator. Her poetry has appeared or is forthcoming in Radius, THRUSH, elimae, and Button Poetry, among others. She is the author of a chapbook, Blood Dowry.  Her full-length manuscript was a finalist for the Write Bloody Publishing ’13 book contest, and she is currently under consideration as a semifinalist for the Tired Hearts Press ’14 chapbook contest. As a slam poet, she has represented Chicago in numerous competitions, including as a semifinalist at the National Poetry Slam ’13 and as the Mental Graffiti venue rep at the Women of the World Poetry Slam ’13. She holds a degree in Poetry from Columbia College and teaches poetry in Chicago Public Schools.